After the exclusive preview of Afterlife With Archie #2 went viral, it was picked up by numerous comic and horror sites including COMIC BOOK RESOURCES, BLOODY DISGUSTING, BLEEDING COOL, COMIC VINE, DEN OF GEEK, FLICKERING MYTH, IMDB, REGATOR, WHATCHAREADING, and more.  While readers were given a glimpse of what issue two has in store, positive reviews still kept pouring in for issue #1 from sites like AV CLUB, HERO COMPLEX, and BIG SHINY ROBOT. 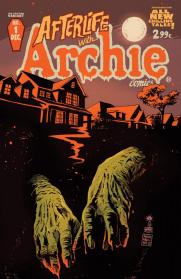 If you missed the chance to read the thrilling first installment of Archie’s first TEEN+ horror comic, you can pick up the second printing of issue 1 in comic shops TOMORROW (11/6), featuring an all-new cover by Francesco Francavilla. You definitely won’t want to miss the chance to catch up on the terrifying events unfolding in Riverdale, especially since issue #2 is right around the corner—on sale November 20th!